What A Good Story Does To Your Body And Brain

Photo by Carl Jorgensen on Unsplash

What A Good Story Does To Your Body And Brain

In 2009, a journalist wanted to find out if storytelling really is the most powerful tool of all. In order to do this, he bought 200 objects from eBay. He then called up authors and asked them if they’d like to be part of his study by writing a story for one of the objects. They agreed. 200 objects and 200 stories later, he returned to eBay.

One of the objects was a horse’s head bought for $0,99. With the story added, it sold for $62,95. An increase of 6393%. This was not a once-off situation, he bought the 200 objects for a total of $129, selling them for almost $8000.
What’s happening here? How are humans so easily and dramatically influenced by a story? The simple answer is changes in our physiology, which affect how much we’re emotionally invested in what’s unfolding.

An engaging story is engaging because it stimulates just the right cocktail of neurotransmitters and hormones in our brains and body to shift our emotional state. For this same reason, stories are incredibly powerful tools of influence. They literally change our physiological state and impact how emotionally invested we become in whatever’s unfolding. While this may sound a little intimidating, it’s a power that can be used to great positive effect when reading to your children or choosing what media they are allowed to engage with, and when.

How To Use Stories To Change Your Child’s Physiology

A good story floods the brain with certain neurotransmitters and causes the release of specific hormones. Pleasurable ones like oxytocin, serotonin, dopamine, and endorphins, and unpleasant ones like cortisol and adrenalin.

This is helpful information when it comes to choosing which stories (written, visual, or audio) you allow your child to engage at which time, and for which specific purpose.

If you’re wanting to increase your child’s sense of well-being, relaxation, and clarity stimulate endorphin release by making them laugh with a funny story.

If you want to nurture their empathy, stimulate oxytocin release by choosing a story that’s moving, relatable, and heartfelt.

Of course, the opposite is also true, if you don’t want them overstimulated or anxious before bedtime, keep the scary tales for another day. 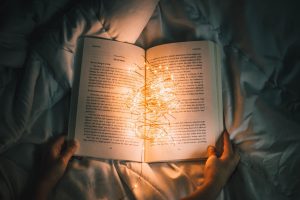 Photo by Nong Vang on Unsplash

The short answer is yes. The tricky question to answer[...]

Letters From Food Country. A funny children’s story about a[...] 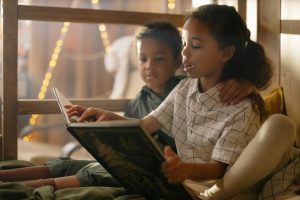 Photo by cottonbro from Pexels

The Untapped Power Of Storytelling To Improve Education